If the trend is more towards transhumance than sedentary lifestyle, some players choose to participate, sometimes going beyond the mere gaming experience to put themselves at the service of the community or the game.

There are many ways to enjoy the game, especially MMORPGs. Whether frugality, moderation, or bulimia, our attitudes towards consumption will inevitably affect our gaming experience. When we no longer know where to turn, leaving virtual dust to accumulate on the shelves of the Steam library, when fascination with one genre makes us forget about all others, when we never reach until the end of the game, the video game remains the same pastime, but is perceived in a completely different way.

Due to its internal mechanics, MMORPG is a genre that encourages the player to waste time. Accessibility and especially the temptation to satisfy the players’ needs for immediacy has certainly led to the development of the genre, which can certainly call into question its sustainability over time, because we then fall into the game of content consumption, overlooked. significant. Indeed, keeping the world in its corner may lead to its destruction in the long run, because its resources are consumed without producing wealth.

The richness of an MMORPG lies in its interactions, in that wasted time that the human experience brings only if you don’t see its progress bar move. If I was the first to disconnect from communication in order to live in peace, then, paradoxically, it became impossible for me – with a few exceptions, such as Zelda – to engage in a single player game. To truly enjoy the game, it is important to be clear about your expectations.

Ever since my first playful video break when Dark Age of Camelot transformed into a form of constant service, I embarked on endless wanderings to reclaim this precious life experience. This lost paradise is filled with great nostalgia worthy of the investment made over the years. Not only the time spent on the forums in the game, but also the meetings in real life contributed to a unique experience. However, my observation is that it is not necessary to chase the utopia of the perfect game, but rather take the time to settle down and invest in it to transcend the experience.

Run for Elections in EVE Online

Some will take this concept very far, to the point of leading an election campaign to become the representative of the people. If everyone has their own personal motives, from the lust for power to the desire to help others, players from all over the world are elected to form the new composition of the Interstellar Council of Management (CSM) Eve online.

This group of ten players will work throughout the year in collaboration with PDA Games about game development Various profiles of CSM members will try to influence the studio in the right direction… or according to their interests. Developers hear them, but not always listen, making some kind of contribution to EVE Online.

I’m always impressed by the energy some players put into writing guides, developing tools, managing groups to offer content to others and improve their gaming experience. Among the candidates for the 17th edition of the CSM elections is also one Jinx De’Care. 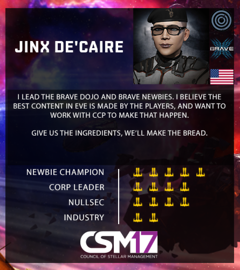 Jinx De’Cair, a member of the Brave Collective since 2016 and a member of the Dojo Maneuver, a specially designed training program to watch new players, is a good example of how investing in a game can lead to a holistic dynamic. I asked him a few questions to try and understand his contribution to EVE Online.

– Why do you play EVE Online?

I play Eve Online because of the breadth and depth of the game, the community and the story.

– What is the state of the game today?

The game is in a tough spot right now, with players complaining about lack of resources, outdated parts of the game, and price hikes on top of all that.

– What do you think of CCP Games?

CCP games created EVE, living universe, this is my favorite pastime. My time in EVE was amazing, so I will always be grateful for that. CCP Games struggles with communication and sometimes makes decisions about games, business and marketing that are very frustrating for players.

– Why are you participating in EVE?

In EVE, I enjoy helping the Brave community reach their goals. This ranges from helping new players to alliance success. I used to try EVE a few times, but it didn’t appeal to me until I became more involved in the community. I have been here for many years. Now I’d like to channel some of that energy into helping the wider EVE community.

– Why did you run in the elections?

Over the past two years, I have seen how the changes affect new players and communities. I hope that by getting a seat at CSM, I can make sure that CPC make the right decisions for new and returning players and help them create content that increases new player retention.

Basically I want to help CCP improve new player retention by improving the early days of the game. I also want CCP to give more tools and toys to corporations and alliances. I think if CCP helped groups of players with more tools to manage their groups, it would help smaller and newer groups thrive and retain players.

– If you could impose CCP Games’ decision, what would it be?

First, I think CCP really needs to end the scarcity (Editor’s note: The game’s developer-imposed resource scarcity period) and then deliver the content promised by FanFest.