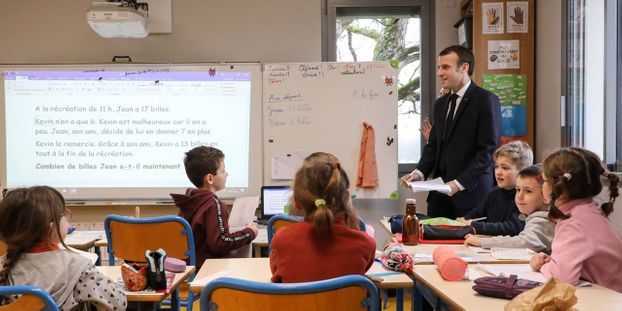 This is a real scandal! Let’s not come and complain about the collapse of the republican front, the course of the votes and the elected representatives of the camps of Zemmour and Le Pen…

Therefore, it is the Algerian government that will provide and finance the recruitment of teachers to teach Arabic, although not necessarily, in French primary schools. The decree was published on June 21 in the Official Journal signed by Emmanuel Macron, Prime Minister Elisabeth Born and Minister for Europe and Foreign Affairs Catherine Colonna.

To be fair, these august initials only ratify the agreement signed between Jean-Michel Blanquer (he swallowed snakes!) and his Algerian counterpart on June 8, 2021. At the time, no one was talking about it.

How do you want to promote secularism among our young children and maintain our model of neutral public services when a country like Algeria interferes with our public education? Algeria is one of those countries that have Islamized their teachings where they teach Arabic from the Koran, forcing children to learn the Koran at the same time as learning Arabic. More and more young people in France do not understand that learning a language is not learning a religion. However, Muslim denominational schools such as theocratic or equivalent countries propagate this terrible confusion between language and faith.

If France wanted to take advice, it could turn to Morocco, which knows how to control its religious authorities, or to Tunisia, whose president of the republic has just announced his decision to abandon Islam as the state religion in his draft of a new law. The constitution was put to a referendum on 21 July. But still, among the several million French speakers of Arabic, of course, most of them are Muslims, but also other Christians, Jews, agnostics or atheists, there are not enough Frenchmen from France, paid by France to teach Arabic, like all living languages. who wants to learn it?

The decree does not stop there: in the name of what intervention in our education system could the Algerian authorities, in accordance with article 10 of the decree, issue a certificate to a French student of the second grade of the middle class who has reached the target level of Arabic language proficiency? We believe we are dreaming. In that case, let’s trust the Algerian government to fix the Arabic baccalaureate exams that young French people take?

Even worse: in accordance with article 12 of the decree “Teachers recruited by the Algerian party, having [notamment] State Diploma of French Higher Education” are exempted from any prior check by the French authorities their teaching and language skills, but even worse, “their ability to carry out teaching duties”. It is a door open to possible pressure, indoctrination, the influence of unknown public education teachers on our children.

Finally, the infliction of fatal stab wounds under the same article 12 “depending on the need, Algerian Party recruits and pays mobilized teachers What a humiliation to learn that France is no longer able to finance public education on its own. Where, where does the sovereignty of France go in the face of such foreign subjugations?

We knew that most of the French imams came from abroad, but now the Arabic teachers will be under the orders of a foreign power whose relationship with France is ambiguous.

Since Emmanuel Macron will have to make a difficult choice in parliament between the left and the right of his “at the same time”, it is urgent that the main law of the secularity of society and the state tries to strike at all these small and large compromises that threaten the values ​​of France. We can always dream…