Here we are at the end of this week. The markets can count themselves happy that they have finally managed to end up in the black, even though we haven’t solved the Fed’s equation yet. There are voices that the fight against inflation is over. The fact that commodities have risen sharply in recent weeks will solve the problem once and for all. I even get the impression that soon we will hear from experts telling us that the rate hike that Powell made is exaggerated, and the fact that the ECB is doing nothing is a stroke of genius. It remains to be seen what we will think of the consumer price index on Wednesday.

For those who are therefore still in the office this month of July and who are more interested in finances than the right amount of water for pastis or the right amount of ice cubes to add to the rosé pool; the main question of the week will be whether global stock markets should be afraid of inflation and worry about the ability of central banks to reduce it. Or we need to worry about the reporting season starting to pick up and potentially make us wary of the onset of a recession.

You will tell me that this is not new and that for several weeks we could not decide, but the coming week will be even more intense because between the CPI numbers on Wednesday, which will probably give us an idea of ​​what the Fed is going to do in the end of the month. Knowing that the question everyone is asking is “Will they raise rates by 0.5% or 0.75%??? “. And by the way, will they give more information about what they are going to do in September, October, November and December???

So between the CPI data and the fact that more than a dozen S&P500 companies are due out this week, including: PepsiCo, Tuesday; Delta Air Lines and Fastenal Wednesday; Cintas, Conagra Brands, First Republic Bank, JPMorgan Chase, Morgan Stanley and Taiwan Semiconductor Manufacturing, Thursday; and Bank of New York Mellon, BlackRock, Citigroup, PNC Financial Services Group, State Street, US Bancorp, UnitedHealth Group and Wells Fargo on Friday. Needless to say, we will have enough to ask ourselves questions, procrastinate a few times, and ask ourselves questions again and again. It is unlikely that we will have answers at the end of the week, but it is certain that we will be able to start making predictions of what we will continue to experience until the end of this month of July. Remember, though, that the biggest challenge of the summer will still be finding the bottom of the market and successfully buying back exactly where and where.

Yes, because according to the financial experts hustling on the CNBC set to give their opinion on the rest of the events, the question is not if we will hit the bottom this year, but where. and when this bottom will be located.

Having said that, my personal biggest concern is the fact that we haven’t completed the normal investor cycle yet. That famous cycle that goes through states of hope – that moment when you start believing a recovery is possible, then into a state of optimism – when you think the rally is for real. Right before the transition to the “believing in it” stage, it is at this moment that a person is 100% sure that he needs to invest “to the fullest”, because he will never stop growing.

Then comes the thrill stage, the excitement stage, the moment when you’re ready to take out loans to invest, so you’re sure you’ve thought of everything. This is just before you get to the stage where you are convinced that you are an investment genius. This is the EUPHORIA stage. And it starts to fall. Just then we start the other side of the mountain. Decrease. First, it is complacency. We tell ourselves that this is “just a fallback”, “just a buying opportunity”. But as the fall continues, anxiety is felt; we don’t understand why it starts to cost so much… And then, the next moment, we enter a state of denial. A short moment when we are convinced that our investments are reliable, that the companies we have chosen are of high quality and that they will grow. So we re-read the theories of Warren Buffett and have never felt so close to him. 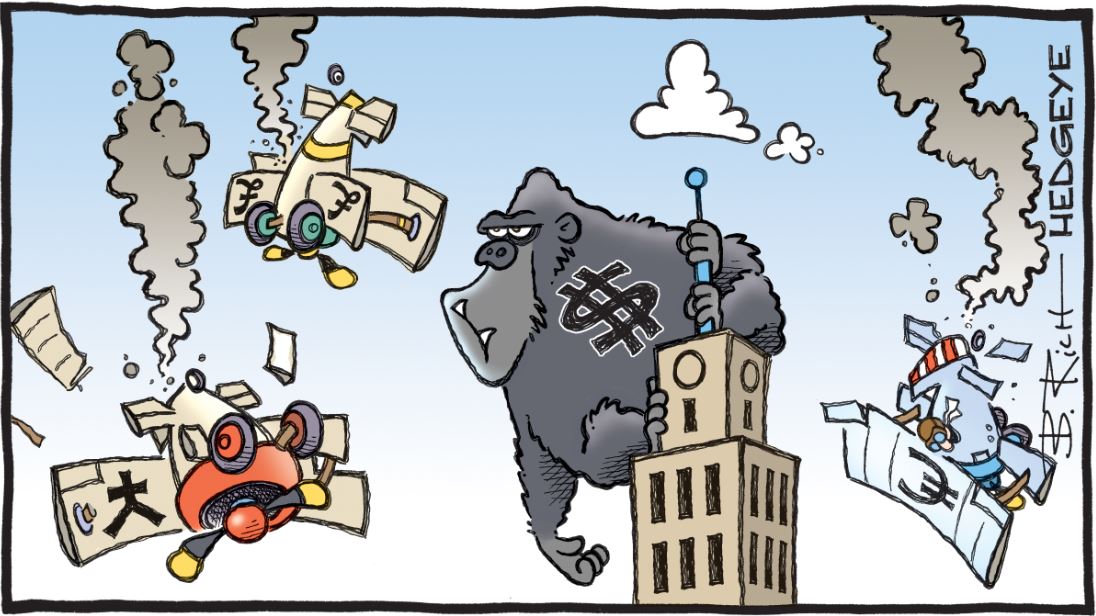 The next moment we forget about the Buffet and panic. Everyone is selling, this is halal, and we tell ourselves that we must go out, take everything out. Sell ​​EVERYTHING. But there is something else that keeps us from liquidating everything, because you never know, it would still be a shame to sell something that may one day rise in price. This phase exists simply to set the stage for the next one: SURRENDER. This irresistible need to sell everything and swear that we will never be caught again, only the stock market: it’s over. It’s just a manipulation in which the same people always win. Usually at this time we blame the incompetence of governments that we do not understand how and why THIS could happen. This is the phase of anger.

The bottom is near.

Then depression. That moment when you tell yourself that you will never get out of this and that you will never retire and that this is terrible and you can’t accept that you were “caught” in that moment. This is when the market starts to rise. As a rule, it finds its bottom between the phases of anger and depression. Then comes the fact that we don’t want to believe in the rally. Then hope. And everything starts again.

All this to say that I find it hard to believe that we are in the anger phase just before the depression, when we still hear so many people and investors telling themselves that we have to be “patient” and that better days are coming. We’re in a strange area where we don’t know if the inflation problem has been solved and growth is barely affected, or if we haven’t yet fully assessed the damage done to the economy over the last two years and the final selling tsunami hasn’t arrived yet. Therefore, we can hope that in the coming weeks we will see more clearly, but it is not easy to believe that everything is settled and that we have nothing to fear anymore.

Moreover, when we see the reaction to last Friday’s employment data, we may still wonder what we really expect and why the market reacts so well to such a strong figure. Economists had expected between 250 and 270,000 jobs to be created in June. So 372,000 is another 100,000 jobs that we didn’t even expect, and everyone thinks that’s a good sign because the economy is fine, and that as raw materials are destroyed, inflation will come down and people will continue to consume like crazy. but reasonable. Clearly, supply chain issues have been resolved, shortages of just about everything have been resolved, the war in Ukraine is over, but we don’t know it yet, and the car I ordered a year later hasn’t made it to the assembly line yet. for about 212 different reasons – all of them are good excuses and show that the economy and the system work so well.

In short, all of this is to say that we will have to work to figure out which direction we want to go and, above all, motivate ourselves to try and keep that direction for just over 48 hours. Technically, the indices are starting to be in overbought areas. Some of them, like the Nasdaq, are approaching the 50-day moving average area, which could be the first key zone for now. But in order to step over our shoulder and start telling ourselves that we are back in a “true uptrend”, we will have to clear the air and give the impression that the Fed is really our friend and that the quarterly numbers are clearly not. this is bad. Unless, when we saw how they reacted to the announcements of Nike or Walgreen, you can fear the worst in case of disappointment. Even a small disappointment can do a lot of damage. Is it all about the price, as some experts like to say. It remains to be seen what is meant by: IT’S ALL IN THE PRICE.

The news of the day that keeps Elon Musk’s finances and enthusiasts busy is that the Twitter takeover has thus officially failed. To be honest, no one really believed that it would be made to see the face of the title within a few weeks. In addition, we were all convinced that $54 was too expensive and that Musk had too many problems to fit into. So after Musk’s attempt to take over Twitter DURING the lawsuit between Johnny Depp and Amber Heard, we will now have a POST takeover period WITH the lawsuit between Musk and Twitter. Twitter should get a billion from Musk, but they want more when Musk has hired the best lawyers to – if possible – pay nothing. We haven’t finished watching courtrooms on TV yet, and in the meantime, no one will be wondering how Twitter will make money in the next two years.

Otherwise, most of the Asian markets are under water this morning at the dawn of this “difficult” week that is about to begin. Japan is on the rise, but lives its own life after the assassination of the former prime minister. Otherwise, Hong Kong lost almost 3%, and China – 1.5%. It should be noted that the Chinese government has just imposed fines on several companies, including Alibaba and Tencent, for not making correct antitrust declarations on some MNA deals in the past. The fines are $75,000 and there is nothing to renew, but that is, first of all, the fact that we believed – for a moment – that the Chinese government decided to let go of the tech companies and stop prosecuting them. But really no.

As Xi Jinping pays the price, oil is worth $104.05, gold is $1,739, and bitcoin is $20,000. On Monday, there will be almost no important economic indicators, and apart from quarterly indicators, it will start tomorrow with Pepsi and will increase towards the end of the week. As of now, futures are down 0.6% and we will certainly be asking many questions until Wednesday with no concrete answers. It remains to be seen how the wonderful world of finance will handle this. This and a new journalistic investigation called UBER FILES, which accuses UBER of almost everything except starting a war in Ukraine. We learn that they were cruel, schemers, that they put pressure on their drivers and on governments around the world. They would even agree with a certain Emmanuel Macron, when he was still only the Minister of Economy.

But nothing serious for Macron. The guy could be re-elected when everyone finds out he got his buddies drunk at McKinsey, so one deal under the table is more or less irrelevant. And then when we look at what Wikileaks or the Panama Papers have changed in the face of the world, we can say that UBER FILES will end up in the trash like everything else.

As for me, it only remains for me to wish you a very good day, a good start to the week, and we will see you tomorrow from where you are on vacation. Enjoy and forget a little about finances, anyway, in the end, they always end up in growth.

“The only limit to our realization of tomorrow will be our doubts today. -Franklin D. Roosevelt