At present, the market is completely lost. We’re not going to lie to each other. We completely lost the slightest investment vision for more than 3 days, we live in a rhythm of quarterly numbers during which we are content with “less worse” announcements and completely panic at every negative message, and finally, we just worry about what it is about recession. On the one hand, the White House tenant tells us that it is a pipe, and on the other hand, there are indicators that tell us that the White House tenant is a pipe. Not to mention that we are waiting for absolution from the Fed, which should act tonight … and tomorrow will be even worse.

I have to say that this morning I am grumpy. Nothing can be done in theory, however, as futures edged up 0.75% after Microsoft, Google and Texas Instruments were “less worse” than expected. After better-than-expected performance from Coca-Cola and McDonald’s. This despite the bloodbath in the retail sector following Walmart’s profit warning, which wiped out all of its competitors and highlighted the fact that inflation can hurt the consumer very badly and eventually lead us into a recession. Maybe I’m grumpy because of the general behavior and attitude towards this market. I dont know. I feel like we’re doing something wrong and keep making mistakes, but I can’t figure out what exactly is wrong.

Going back to yesterday won’t do much good other than remembering the fact that Europe didn’t have the most exciting day yet, as everyone sits around doing nothing in the meantime. FED as the messiah in Europe, we put aside the fact that the Italian debt will explode in our faces and that the lack of gas will also explode in our faces in the coming months. No one (at least in the beautiful financial world) cares too much that sanctions against Russia are bringing the European economy to its knees, although the brilliant politicians who lead us have foreseen the opposite. Thus, investors from the Old Continent seem to be convinced that what the Fed does and says tonight will be the key to the rest of the events.

On the other hand, we are not going to blame them, since the Americans are doing the same. They spend their time analyzing what has happened in the market with recent rate hike announcements to try and guess what will happen tonight when Powell raises rates by 75bp. This is not a stupid strategy, at worst the market does the opposite of what it has done in the past and we can always say that “it’s not an exact science and it can’t work at all”. As usual. However, as investors, we are now facing a difficult situation from a psychological point of view.

If we take just the case of the Fed, rising rates, inflation and the recession that hangs in front of our noses (despite what the Magical American President says, who found no other way – to avoid a recession – other than to change the very definition of a recession) is that we can no longer use the good old rate hike theories we had in the “old days”. When I talk about the old days, I mean the days when we didn’t have a smartphone and our priority was not to increase the number of followers on our Instagram account. In the old days, when the Fed raised rates, we didn’t like it, and the markets fell. The next day we moved on to something else until the next meeting of the Central Bank on the issue and BASTA! 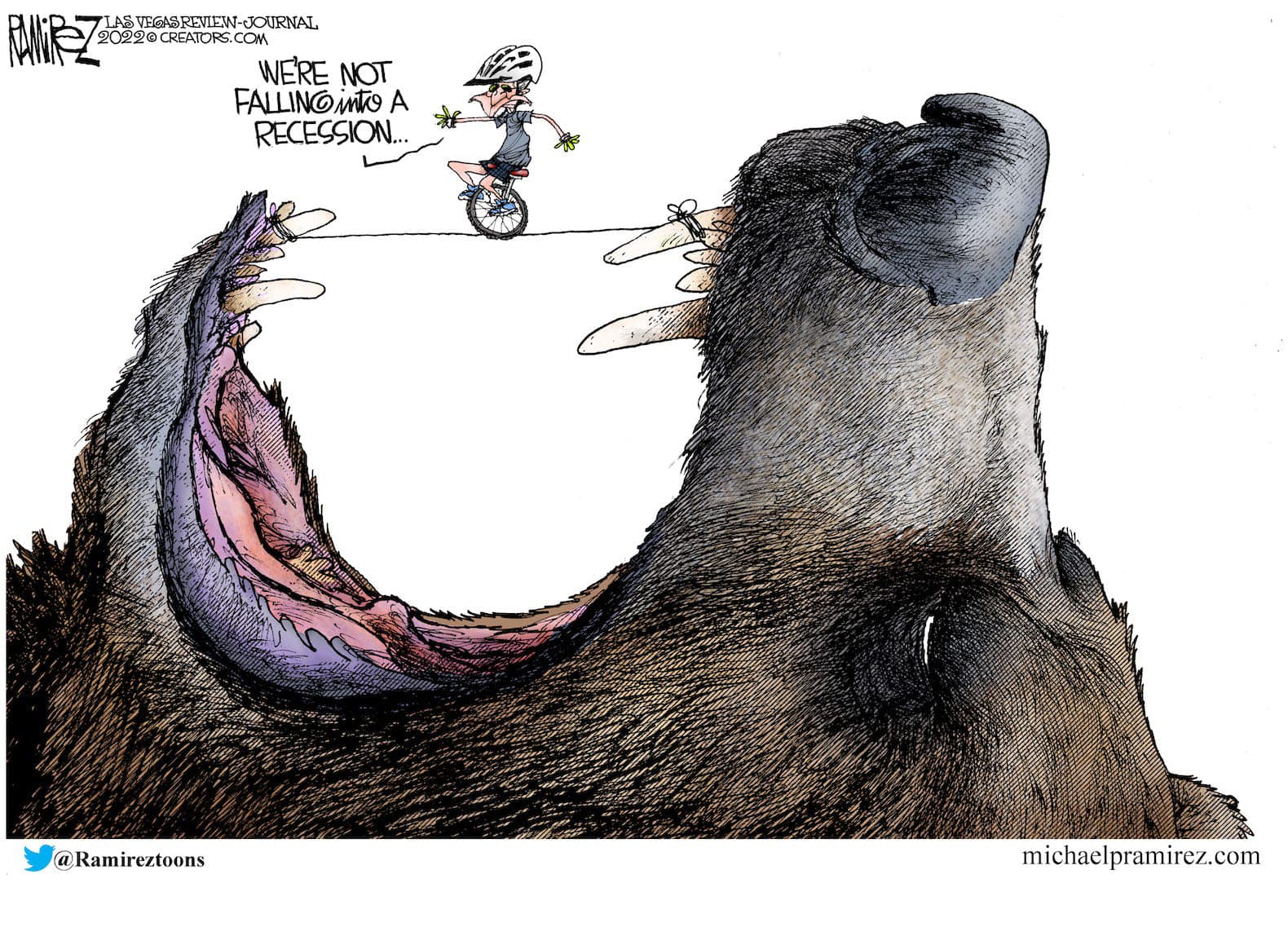 Only today is not the same. Maybe it’s not the same because we think more, or because we let statistics do the thinking for us, or because we can no longer make decisions in the moment without planning 22 different scenarios that can make us regret the choice we made at first sight. . I dont know. What I do know is that the path of reflection we are on today is downright torturous and that in the end we are not even convinced that a decision should be made anyway.

Long story short, the Fed is going to raise rates by 75 bps tonight and then we’ll be asking a lot of questions about what they’re going to do AFTER, but we won’t have an answer until September, especially since we’re going to miss him so much. items to answer questions.

And here are the numbers for the quarter

And then, when we’re not talking about the Fed, inflation, recession, and all the economic words that end in -ion, there are quarterly numbers. So this is another poem. Psychologically, this is even more tortured than our PED tests. The bottom line is that over the past month, most of the companies that publish today have warned us that, simply put, “it’s going to be crap.” All of a sudden, all the finance stars who hadn’t yet seen it was going to be crap took the opportunity to revise their expectations downward. The story is that the companies in question don’t “disappoint” too much when publishing quarterly numbers. The way it is. Yesterday you had Walmart issue a profit warning and screw it up, but as we now know, when the quarterly data comes out in mid-August, we won’t be surprised if it’s bad. The fact that this also means that the consumer is on the brink of inflation is of little consequence. It doesn’t matter because the Fed will take care of it. If you do not understand, refer to the paragraph above.

All of a sudden, companies that have already said it won’t be easy are now starting to go public. Last night was Microsoft, Google and Texas Instruments – if we talk about the technology sector only – these three recently announced that it will be difficult and that the crisis in China, the war in Ukraine, falling PC sales, Australian koala breeding problems and Kardashian accusations on Instagram for doing “like Tik-Tok” could lead to their downsizing, which could affect earnings. As a result, yesterday all three posted slightly weaker numbers or were in line, but overall LESS WORSE than expected. Not to mention, management’s comments were quite reassuring. Therefore, the following formula was applied:

And the caterpillar starts again

Microsoft, Google, and Texas rose post-shutdown by 2% to 4%. Yes, I understand that this is not crazy either. But it’s also WHAT to remember at this point: if the numbers are less bad, stocks bounce back 2-3% and the whole market starts up again, the whole sector. On the other hand, if the numbers are really rotten, like Shopify yesterday or like SNAP last Thursday, a bloodbath is guaranteed. Shopify took 17% yesterday. Never mind, it’s only down 82% since November, and to top it off, they’re going to lay off 1,000 people.

All this suggests that the market looks completely sick and western. That everything is based on the psychology of the market and more on real facts. The sanctions are terrible and the thoughts we have will soon become more volatile than city gas. City gas, which is likely to stop flowing to cities soon. In addition, we have another problem. This morning, for example, futures were up nearly 0.8%, posting less-than-expected numbers from Microsoft, Google and Texas. Which, of course, means that Meta is not doing so badly today, and Amazon and Apple tomorrow too. Except that, as we’ve already anticipated, it’s more than likely that Apple and Amazon will drop after announcing their numbers – the visionaries that we are. And also the Kings of anticipation that we are.

But aside from the more or less reassuring interpretation we make of the quarterly numbers, we must ALSO remember that we are world champions at hiding problems under the rug:

– Italian debt and government crisis: WE DO NOT CARE
– The US real estate market, which is on the brakes and threatens to return us to the typical fall of 2008: WE DO NOT CARE
– About the fact that this winter Europe will have to burn firewood and that it will be cheaper to burn 100 euro bills than to turn on electricity: WE DO NOT CARE…

Well, after all, you will tell me that central banks are doing everything they can to get us out of this. So there is nothing to worry about. But good. I’m grumpy this morning, but tomorrow will be better.

Otherwise, Asia is doing nothing this morning. Except for Hong Kong, which fell 1.5% pending the Fed’s decision. Oil is back at $95, which should make the Fed’s job easier tonight, with gold at $1,712 and Bitcoin at $21,000. More or less. To be frank, the world is on Powell’s lips tonight, and after hours it’s on Zuckerberg’s. Suffice it to say that one should not expect much from today, and not a change in leadership at the head of Credit Suisse will change much.

So we’ll spend the day waiting for the Fed; then we’re going to spend the night reviewing what the Fed is going to do next, and USUALLY we shouldn’t be any further tomorrow than before. Except that we will continue to ask questions about rates, inflation and recession.

Have a great day as far as I’m concerned, I’m going to make myself a Xanax sandwich and I’ll be back tomorrow less grumpy!!!

“If you really look closely, most of the instant successes took a long time.” -Steve Jobs