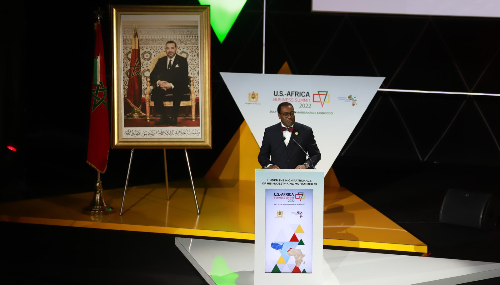 “In a 2020 survey conducted by the African Private Equity and Venture Capital Association, about 45% of limited partners expect revenue in Africa to exceed that in emerging and developed markets over the next 10 years,” Mr. Adesina said at the opening of the conference . 14th US-Africa Business Summit, believing it is time for US investors to act quickly and invest massively in Africa.”

In this sense, he said that Africa offers a “very profitable” investment destination, noting that the continent is highly invested by investors and that the number of private equity funds in Africa has increased from 12 in 1997 alone to 150 in 2020. .

There is always a first-mover advantage and opportunities await no one, he said, noting that U.S. FDI in Africa was $47.5 billion in 2020 and, while significant, there is plenty of room for expansion as U.S. FDI in Africa Africa accounts for only 5.2% of global US foreign direct investment.”

On the other hand, Mr. Adesina stressed the importance of President Joe Biden’s “Restore a Better World” program in helping move investment from the US private sector to Africa. “It’s time to freshen up, re-engage and reinvest in Africa. Like you, it is important to base your investment decisions in Africa on facts and not on fiction or imagination. Perception is not reality,” he said. .

He also recalled that in 2020, Moody’s Analytics 10-year cumulative assessment of global infrastructure default rates by region found that infrastructure lending was less effective in Eastern Europe, Latin America and Oceania and that Africa was the region with the second lowest cumulative default. the ranking, after the Middle East, proves once again that infrastructure like this asset class in Africa is “reliable, reliable and profitable”.

That is why the AfDB has invested more than $44 billion in infrastructure in Africa over the past six years in the areas of energy, transport, digital infrastructure, water supply and sanitation,” he said.

On the issue of natural gas, Mr. Adesina assured that Africa is ready to become an alternative source of supplies in this area to help secure Europe’s energy supply after the Russian-Ukrainian war, which disrupted energy supplies. “From Nigeria to Ghana, through Tanzania, Senegal, Morocco, Kenya, Algeria, Africa today has some of the largest reserves of natural gas in the world,” he said.

And to support: “Africa has some of the largest lithium deposits in the world, from the Democratic Republic of the Congo to Namibia, Zimbabwe and Mali, enough for the Continent to compete with China and Chile in the race to supply global value chains for electricity. cars”.

He also applauded the huge opportunities available to the African continent in agriculture, with 65% of arable land left uncultivated to feed the world, pointing out that what Africa does with agriculture will undoubtedly determine the future of the world’s food.

“If that’s not enough to convince you to invest in Africa, let me try further: the African Continental Free Trade Area (AfCFTA) will be the largest free trade area in the world with a $3.3 trillion market spanning 54 countries and populations. out of 1.3 billion,” he said, highlighting the huge investment opportunities in renewable energy, including 10 TW of solar, 350 GW of hydro, 150 GW of wind and 15 GW of geothermal.

This summit, under the high patronage of His Majesty King Mohammed VI, which will run until July 22 in partnership with the Corporate Council for Africa (CCA), is attended by, among other things, a large delegation of the US government. African ministers and decision makers from major US multinationals and African business communities. While offering an opportunity to forge future-oriented triangular business partnerships between the US, Morocco, and Africa, this summit also represents an opportunity to strengthen the strategic position of Morocco, the only African nation to have a free trade agreement with the United States, as a hub for Africa and a reference economic partner for USA.

This conclave will be marked by the organization of high-level dialogues, plenary sessions, panels, round tables and side events on the continent’s priorities in terms of food security, health, agriculture, energy transition, new technologies, infrastructure and integration. industrial ecosystems.