Inflation is undoubtedly the economic theme of 2022. To contain it, Western central banks sharply raised their key rates in June. Thus, these institutions mark a break with the post-2008 world. For 14 years and almost without interruption, they tried to lower the price of money until they hit the famous negative rates in 2015. The fight against the collapse of “mortgage loans” will be fought at this price.

On June 16, the Swiss National Bank raised the rate from -0.75% to -0.25% and there is a high probability of crossing the 0% mark by the end of 2022. Farewell, fear of parity with the euro, this is no longer a topic, according to the SNB, the monetary balance has been restored.

Inflation in the US and Europe: one fight!

Thus, the new challenge for the SNB is to contain the price increase, which is approaching 3% y/y (May data). And if that “official” 3% seems high to you, know that inflation in the US and the Eurozone is rising to 8.6% and 8.1% respectively year on year (also in May)! If you have read This articleyou know my point of view on public figures…

On the Asian side: China and Japan maintain much more attractive rates. China is looking to revive or at least maintain its economic growth, while the Bank of Japan estimates that inflation remains within the target level of 2%. The reason for this new inflation in a deflationary country is the same as here: energy imports.

Switzerland under the sun…

Thus, even if inflation is high, it does not make sense to consider it without other data such as unemployment and economic growth. With unemployment at 2.1% and GDP growth expected by SECO by 2.8% for the year, Switzerland is in a good position to contain the impact of rising prices. In the first quarter, annual growth was 4.4%.

Therefore, you can ask for a pay rise if your industry remains prosperous and your workforce is limited.

Can central banks single-handedly curb inflation? Of course not. And geopolitical news does not allow making predictions. Also, how many predictions are correct? No one saw such a significant rise in the Swiss exchange rate in June.

If central banks cannot fully contain the rise in prices, the question arises of protecting your assets. What assets seem to be the most interesting? We started answering it. here and I suggest the following below.

In a previous article, I concluded that the only way to fight inflation is to invest your money. We saw that raw material ownership paid off in the decade 1970-1979. In particular, oil and gold provided good protection against inflation.

Apart from inflation, we cannot fully compare the 1970s with what we have today. Indeed, the West was in stagflation. Inflation was high, economic growth was sluggish, unemployment was high, and the Fed had just dropped from 10.50% in 1969 to 4% in early 1970. The Swiss franc has lost 50% of its purchasing power.

The Yom Kippur War and the resulting political backlash exacerbated these factors.

Let’s look today at the behavior of stocks and bonds during this period.

Large companies offered a dollar yield of 5.35%. Adjusted for the Swiss franc, the loss over 10 years was -60%! How to hedge currency fluctuations or invest in your own currency can make sense.

Another point of convergence between today and the 1970s has to do with the financial health of the major oil companies. The price of black gold increased 10 times between 1970 and 1980 and 2.5 times in the last 24 months. Who can benefit from this in your opinion?

I invite you to familiarize yourself with the profits of the largest oil companies in 2021, as well as forecasts for the current year. Analysts around the world expect 2022 to be 100 percent better than the previous year, which already topped a 15-year-old record. As in 1973, when Exxon Mobil announced profits 80% higher than in 1972. 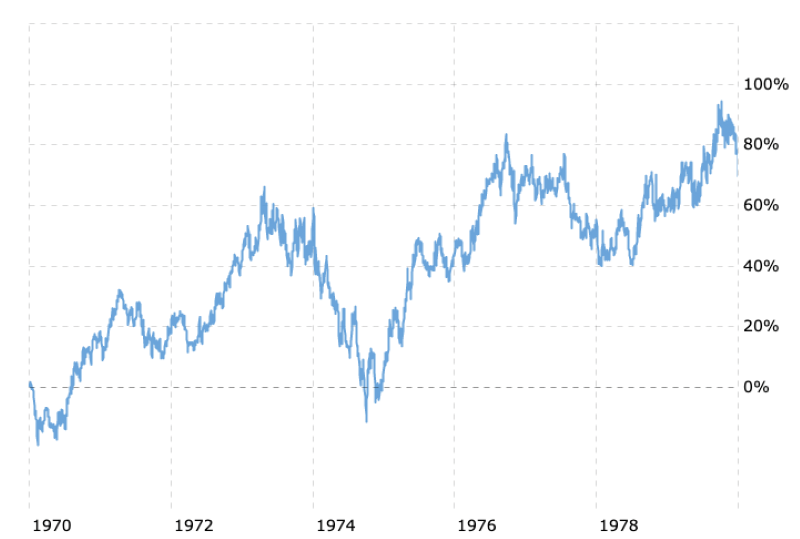 Thus, owning large oil companies appears to be a winning choice in a period of inflation, especially against the backdrop of an energy crisis. At least this is true for the USD investor. Not very “green” as an observation, even if we have to admit that the reality of our dependence on hydrocarbons is catching up with us.

Return home with a Swiss accommodation in Swiss francs. According to Pictet, investing in the country’s main stocks would partially curb inflation. With growth slightly above 26%, the fall in purchasing power will be halved. It’s better than keeping your assets in cash, but it’s not entirely reassuring.

Reading this data too quickly, one might think that investing directly in crude oil and gold is preferable. This is too much to focus on in the short term.

A smart investor will work along two axes. He will first maintain and rebalance his portfolio over the course of a decade, especially during market downturns, to drive down the average purchase price. By doing so, our investor will make a higher return: investing during the S&P 500 sell-off in September 1974 (down more than 46% from December 1972) will allow him to make a higher return during the stock markets rise. A simple monthly savings plan will be enough to materialize this effect.

“The best chance to allocate capital is when things go wrong.” Warren Buffet

Of course, our saver will sooner or later invest in his assets to buy a house, pay off debts or satisfy his desires … but inflation would be largely offset.

As for Swiss bonds, again based on the Pictet study, bond returns outperformed stocks by 3.5 times over the period 1970-1979. In this short period, this is excellent as inflation has been eliminated and real growth (adjusted for inflation) is almost 30%.

However, the result for the period 1970-2000 is very disappointing: “only” 429%, which we can compare with stock returns of 1648% or inflation of 378%. You can find a summary of indices, inflation and exchange rates below.

I cannot end this article without mentioning real estate. An investment in stone can provide some inflation protection as rents are usually indexed. An increase in rent theoretically leads to an increase in the value of land.

However, it is worth paying attention to how fast mortgage rates are rising. The rapid increase in these costs cannot be immediately passed on to the tenant.

During Switzerland’s last major real estate crisis, mortgage rates quadrupled in two years. As I write this text (June 2022), the price of long-term debt (10 to 15 years) has already tripled in a year and a half.

As for investors’ favorite rate, SARON (ex-Libor), it could soon rise once the key SNB rate exceeds 0%, which is expected at the end of 2022.

Ultimately, even with rising rents, property values ​​may fall (from -20% to -40% in the 1990s) and require additional claims from lenders (early repayments).

In another article, I will talk about the strategies and considerations that need to be taken to protect against rising mortgages and falling land prices.