Task: find a rare pearl. To invest in a controlled-risk Pinel system, an investor must target a city that is dynamic enough to guarantee strong rental demand, yet prices remain reasonable to ensure long-term capital appreciation. Problems identified 6 cities that fit this profile. It is better to forget about the hypercenter of large cities and focus on their municipalities in the outskirts or medium cities. They are all located in zone B1, where Pinel’s rent ceiling is 10.51 euros per m². “This ceiling extends over the weighted surface of the living spaces, including extensions (open spaces) for half of their area,” recalls Marc Guillemoy, asset management consultant at Quintésens.

In selected cities, the Pinel threshold is just below market rent. But this gap, and hence the deficit, is growing in the very center of megacities. In addition, programs in Lyon, Bordeaux or Rennes do not allow full tax exemption for the amount of the investment, as prices lead to excess ceilings (real estate less than 300,000 euros, less than 5,500 euros per m²). As for the structure in place in some of the municipalities of the Île-de-France, in Lille, Lyon, Villeurbanne and soon Bordeaux and Montpellier, it does not affect operations, since the rent remains higher than that of Pinel’s device.

It’s a good compromise: Villenave-d’Ornon is ideally located south of Bordeaux, close to the motorways serving the Atlantic coast and Toulouse, and an 18-minute tram ride from Saint-Jean station. In ten years, the city, whose center is undergoing massive restructuring, has become a real transfer market for Bordeaux. At 4,500 euros per m², prices for new buildings remain more affordable than in the center of Bordeaux (6,000 euros per m²) Good conditions. 2 and 3 bedroom apartments are most sought after by young couples and families, with students preferring Talence, close to the University of Bordeaux, Kedge BS and numerous engineering schools. In addition, turnover in these premises is more limited than in studios, which minimizes the number of rental vacancies.

In terms of price, a 44 m² Pinel ceiling with a 9 m² balcony costs 552 euros. “This is 8% less than free rent, which is around 600 euros, but this difference is largely offset by tax benefits. Conversely, in the center of Bordeaux, the difference between the market and Pinel is 20%,” emphasizes Stephan van Haffel, Managing Director of Net Investissement. Attention: Bordeaux has to limit the rent during the year. Gradually applied to new rents, this structure will eventually drive down a market that will still remain above the Pinel threshold. “From this point of view, Bordeaux is not the best solution for investing in rentals, either old or new, except for the desire to invest exclusively in heritage,” Stefan van Haffel analyzes. 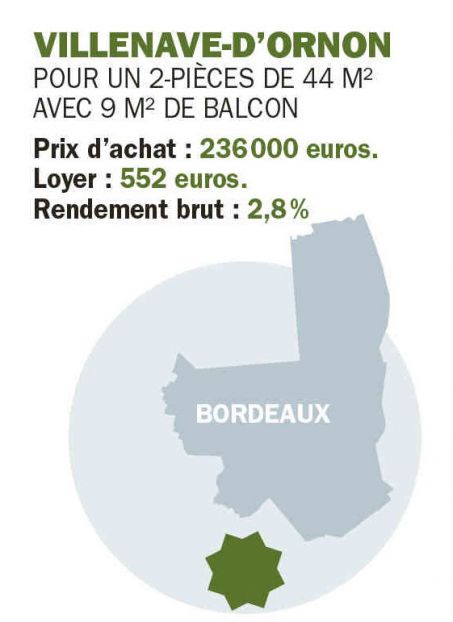 46 minutes by TGV from Paris and Reims is taking full advantage of the arrival of Ile-de-France residents in need of space and greenery after the lockdown. “Two TGV stations, a developed economic center, 30,000 students (Sciences-Po, Neoma Business School, University of Reims Champagne-Ardenne): everything is in place to keep the Reims real estate market growing after a 14.5% increase in two of the year. “, predicts Kurt Vural, Commercial Director of the Se-lexium Group. In new buildings, prices fluctuate around 5,000 euros per m² in the city center, next to the station, and from 4,200 to 4,500 euros per m² in the Comedy district, on the banks of the Vesle, very close to the center Under the Pinel regime, a 2-room apartment of 41 m² with a balcony of 4 m² costs no more than 515 euros.The level corresponds to the market.

“The same property could be rented for 515 euros near the Reims train station, but at a higher purchase price of around 220,000 euros, instead of 190,000 euros in the Comédie district,” adds Kurt Vural. Thus, the gross profitability of the operation ranges from 2.80% to 3.25% depending on the chosen area. A sign of the city’s dynamism, the city’s community is planning many investments, including the transformation of Port Colbert into an eco-district. 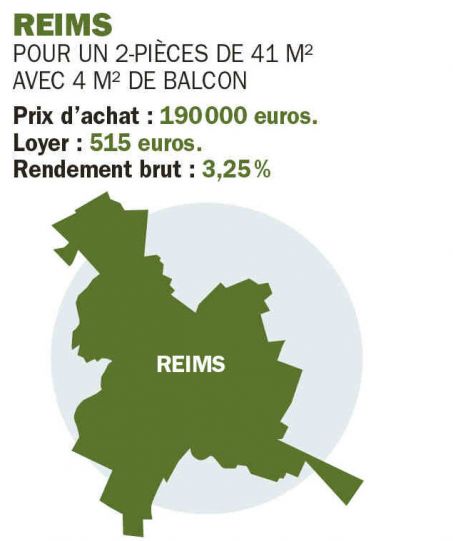 The “Airbus Triangle” is the nickname given to the municipalities of Blagnac, Beauselle, Cornebarrier, Colomiers and Saint-Martin-du-Touche. “There are 70,000 jobs in this area,” recalls Kurt Vural, commercial director of the Selexium Group. “There is a dense transport network and the supply of housing is below demand, which is good news for owners.” Especially since the cancellation of the local urban plan in May 2021 in the suburbs of Toulouse slowed down construction projects. Today in these communes you can find 2 pieces from 200,000 to 220,000 euros, that is, at least 50,000 euros less than in Toulouse.

The Pinel ceiling for a 2-room apartment of 43 m² with a balcony of 4 m² is set at 529 euros, which is a very real amount, i.e. gross income is 3%. “On the contrary, the rent for the same apartment in the center of Toulouse will also be limited to this amount, while the market is more than 650 euros,” specifies Kurt Vural. Other good news: The towns around Blagnac are sought after by investors and buyers as prime residences. This diversity will prevent an influx of real estate for resale in nine years, when the tax breaks for owners are over. 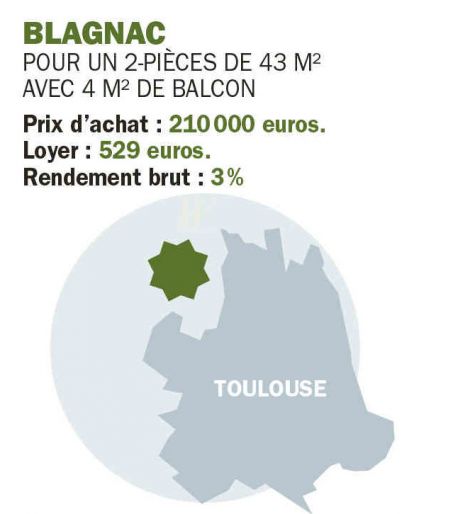 “Significant job pool and student city: the conditions have been created to generate high demand for rentals in the Angers metropolitan area with a population of 300,000 people,” said Marc Guillemoy, asset management consultant at Quintésens. He is certainly interested in the city center at a price of 4,400 euros per m², as well as Pont de Sé or Trelaze, where prices range from 3,000 to 3,500 euros per m². “These are emerging sectors, which is important because the investor is not only looking to generate rental income under the Pinel regime, but also potential capital gains in case of resale in the future,” he adds. . The monthly cost is a maximum of 549 euros for a 2-room apartment of 45 m² and a balcony of 5 m², i.e. the level is slightly below the market, about 580 euros for this area. The gross operating income is 3.29% for properties purchased for €200,000. 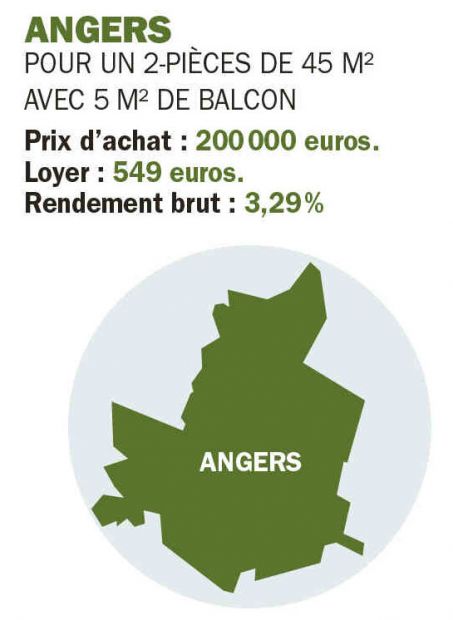 “Nancy is Rennes 15 years ago,” sums up Marc Guillemoy at Quintésens. Either prices are still reasonable (3,600 euros per m² on average in new buildings), or there is a strong demand for rentals, especially for 2 and 3-room apartments, due to the large population studying in the city (University Hospital Center, MCN Artem, Science-Po …). “Pinel’s rent for a 2-room apartment of 46m² and 5m² of balcony is capped at 530 euros, slightly less than the market price of around 540 euros. The deficit is very low and the investor can rent out the apartment quickly. your apartment,” the adviser calculates. On the purchase side, expect at least 180,000 euros for a 2-room apartment. The gross yield is 3.4%, which is a satisfactory level given the rental risk. Eventually, it will be possible to convert the property to be rented out to students to take advantage of the tax benefits of this regime. 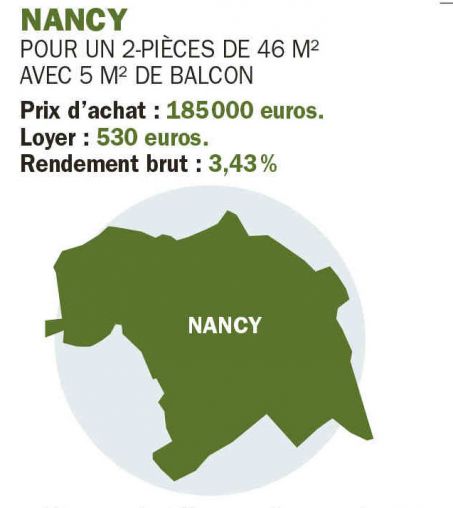 Get out of the center of Lyon, where new homes for less than €300,000 are rare and often cost more than €7,000 per m². Also gone are areas such as Mezier, Saint-Priest or Venissier, where new developments are mostly purchased by investors, raising the risk of a more delicate exit in the long run: many apartments risk being put up for sale at the same time the end of the tax grace period.

A good compromise is located 6 km west of Lyon, in Tassin-la-Demi-Lune. “There are 2-room apartments priced at 240,000 euros, or 6,000 euros per m², with real heritage: quality condominiums are made up of both owner-tenants and investors,” explains Marianne Gallion, real estate manager directly from Pierre by Crystal . . The ceiling of the Pinel scheme reaches 449 euros for 33 m² with a balcony of 4.8 m², i.e. gross yield of 2.25%. “The city is dynamic, the demand for rent is high. In case of resale within nine years, the property may be of interest to both investors and buyers for the main residence,” adds Marianna Gallion. 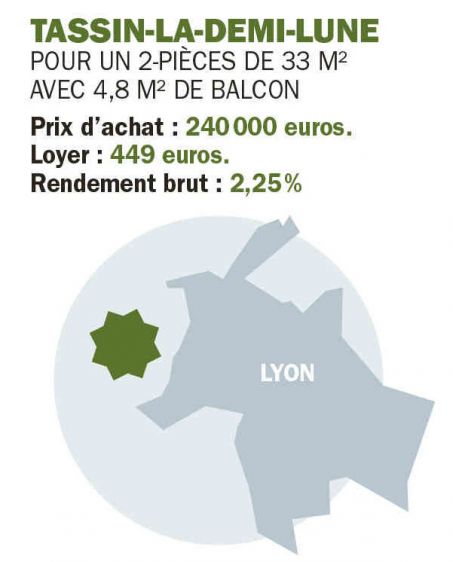