In the financial sector, wages have exploded over the past four decades (see chart). For example, in the US in the mid-1980s, financial workers earned 1.1 times more than other private sector workers; in 2014 they earned 1.7 times more than the last [Böhm et alii, 2022]. The increase in finance wages also explains much of the growth in high incomes in a number of countries, especially in France. [Godechot, 2011]. Financial expansion clearly looks, if only because of this bias, as one of the vectors of the increase in income inequality that has been observed in developed countries since the 1980s. (one).

GRAPH Relative wages in the US and Swedish financial sector 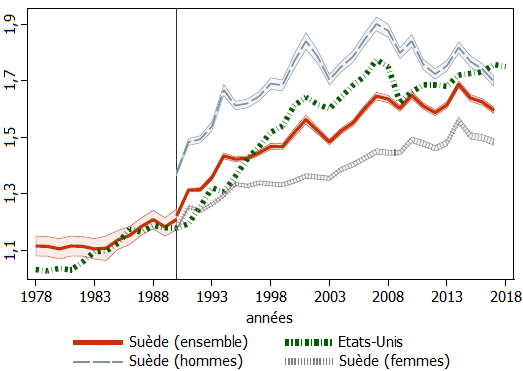 How to explain the wage explosion in finance?

According to neoclassical logic, when the labor market is perfectly competitive, wages are assumed to reflect the marginal productivity of workers. From this point of view, the increase in wages in the field of finance can be explained by the increase in the efficiency of financial employees compared to other workers. Some observations by Thomas Philippon and Ariel Reshef (2012) point to this: in the United States, the deregulation movement that took place in the 1980s was accompanied by an increase in labor complexity, demand for skilled labor, and skill levels in the financial sector, with the share of the latter in GDP grew in parallel. In other words, with the complexity of the tasks to be solved, the financial sector had to hire a more skilled workforce; if then the productivity of workers increased, their remuneration would naturally increase.

But in reality, markets are not perfectly competitive. The explosion of wages in finance can also be explained by the increase in rents received by financial workers. Indeed, the most profitable companies tend to pay their workers higher wages, so these firms tend to show more wage dispersion than others. [Card et alii, 2018]. However, looking at the American example, Philippon and Reshef (2012) note that profits in the financial sector grew faster than in the rest of the economy. They estimate that rents could explain 30% to 50% of the wage gap between the financial sector and the rest of the private sector. In a later study, they came to a similar conclusion by observing other countries. [Philippon et Reshef, 2013].

Several factors also raise doubts that financial workers have become more efficient. Thomas Philippon (2015) noted that the unit cost of producing financial services has not declined in recent decades, suggesting that productivity in the financial sector has not increased over this period. And the fact that wages in this sector have hardly fallen since the global financial crisis of 2008 clearly indicates a possible gap between private and social returns in it.

Whatever the explanation for the surge in remuneration in finance, if it is worrying, it is, in part, because it can lead to a brain drain: by striving for remuneration at a “fair” value, the most effective employees could be rewarded . apply for a job in finance and therefore give up other sectors. James Tobin (1984), seeing the growing number of students leaving colleges for jobs in finance, feared that the expansion of the financial sector would lead to a poor distribution of “talent” to the detriment of other sectors of the economy. especially the activities most important for long-term growth or collective well-being [Murphy et alii, 1991].

Observing a sample of 13 countries from 1980 to 2005, Christian Nier (2013) confirmed these concerns. She found that financial liberalization was associated with improved skills in the financial sector; that financial reforms tend to slow the growth of skilled employment in high-skill sectors compared to low-skill sectors; and that such reforms have generally been accompanied by slower growth in labor productivity, total factor productivity and value added in sectors dependent on skilled labour. These findings are consistent with the “brain drain” scenario in finance.

It is difficult to determine to what extent the increase in financial remuneration is due to an increase in the productivity of its workers or a wider capture of rents by the latter. The two explanations are not mutually exclusive: finance workers were able to both increase efficiency and learn better how to collect rent.

In a new study, Michael Böhm, Daniel Metzger and Per Strömberg (2022) compared these two explanations in Sweden, a country where financial sector wage dynamics are very similar to those seen in other countries, especially the United States (see chart). ). To do this, they used a large administrative database covering the period from 1990 to 2017. This database has the particular advantage of providing accurate information about the professional trajectory of all Swedish workers and their level of remuneration, as well as indicating their level. “talent”, in particular, with the results of fitness tests organized by the army.

In examining this data, Böhm and his co-authors find no evidence to suggest that financial sector workers have become more talented: they are, on average, more “talented” than others, but their levels of “talent” have declined. did not improve during the study period in either absolute or relative terms. In addition, at each level of diploma and “talent” there has been an increase in the relative salaries of financiers. These results give confidence in a possible brain drain into finance.

On the other hand, Böhm and his co-authors believe that half of the wage growth observed in finance is due to the increase in profits that this sector shares with its workers. Financial workers seem to have received more rent, of course, to the detriment of other sectors of the economy.

(one) There are other channels through which the financialization of the economy affects directly, and not just quantitatively, the distribution of income (see. Carsten Kohler and etc.2018).

BEM, Michael, Daniel METZGER and Per STROMBERG (2022)“Since you are so rich, you must be very smart”: Talent, rent sharing and a salary supplement in finance, IZA, discussion paperNo. 15337.

GODECHO, Olivier (2005), Merchants. Essay on the sociology of financial marketsOpening.

GODECHO, Olivier (2007), The worker is rich. Wages, bonuses and profit distribution in the financial industryOpening.

GODECHO, Olivier (2011)“Finance and the Rise of Inequality in France”, working paper.

KNIR, Christian (2013)“Finance as a magnet for the best and smartest: the impact on the real economy”, De Nederlandsche Bank, working paperNo. 392.

PANIZZA, Hugo (2017)“Nonlinearity in the Relationship Between Finance and Growth,” Graduate Institute for International and Development Studies, Working Paper, No. 12-2017.

PHILIPPON, Thomas and Ariel RESHEF (2013)“An International Perspective on the Growth of Modern Finance”, in Journal of Economic Perspectives, flight. 27.