Monthly review by Nicolas Blanc, Distribution Manager at ELLIPSIS AM. 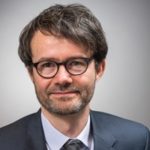 The sequence of events in June gradually confirmed the deterioration of the economy as a whole.

The bad news about inflation forced the Fed to raise rates by 75 basis points, raising fears that it would be forced to slow the economy significantly to bring inflation under control. Industrial metals, very sensitive to the economic situation, fell sharply during the month, as did agricultural commodities. Even oil, despite its recent rebound, has fallen. These moves are coming even as China reopens its economy. Finally, European and US PMIs were posted well below expectations, and if they remain above 50, the loss of momentum is clear and consumer confidence continues to deteriorate.

Thus, there is no longer a question about the slowdown, but rather the question of its extent. The remaining positive arguments concern the good health of private balance sheets – households and companies, as well as financial institutions, two elements that could save us from contagion and amplification effects caused by forced deleveraging and blocking the financial sector. sector. The reporting season that is about to begin will no doubt be instructive about the resilience of the private sector.

The Fed is accelerating

The 50 basis point increase is historically in line with the Fed’s rapid tightening. However, the latter eventually decided to raise its rates by 75 bp. in June after worsening inflation forecasts. The price index for May was indeed published 0.3% higher than expected (+8.6% y/y and +1.0% m/m), a significant difference that further pushes back expectations of a peak in inflation. The University of Michigan survey also showed that households have also adjusted their perceptions of long-term inflation upwards. Finally, the job market shows no signs of respite and creations are exceeding expectations.

By making this unexpected decision, the Fed risks overdoing it and causing an unnecessary slowdown in the economy. We also see a sharp decline in inflation expectations backed by the swap market, with signs of slowing accumulating (see below) and tightening financial conditions. Therefore, one could call for rectification of the situation from the beginning of next year, as the markets expect.

Falling eurozone and US PMI… and other signs of a slowdown

The Eurozone PMI fell sharply, with the composite index shedding 2.9 points to 51.9, while the consensus was 54. The new orders component was 50 points down 3.3 points, marking the end of the optimism that prevailed before so far, while stocks have risen significantly, which is not very promising for future demand. However, these figures must be interpreted in light of the surrounding geopolitical context, in particular the energy crisis threatening Europe. The current level of PMI, which, nevertheless, remains in growth territory, may indicate that the economy is in a position not to avoid, but to absorb the coming shocks.

Another element to watch out for is this study reports a reduction in inflationary pressures and improvements in supply chains (price components and delivery times). While these elements are primarily analogous to a slowdown in demand, they help ease the pressure on the ECB.

The situation is similar in the US, where the composite PMI was published at 51.2 against the expected 53.0. The rate of decline is even greater for manufacturing activity, which fell from 57 to 52.4.

Household confidence indicators are also deteriorating, with some hitting historic lows. The contrast between current conditions and forecasts for the future is another sign of a slowdown to come. 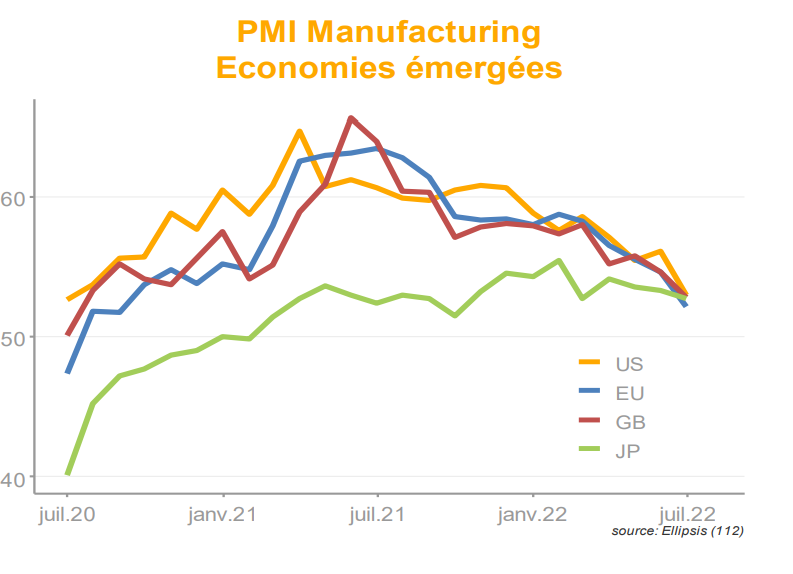 In a phase of confrontation with advanced economies, the Chinese economy is accelerating, driven by the breath of reopening its economy after a period of severe health restrictions. The latest PMIs were posted sharply higher (+3.6 for manufacturing and +5.2 for services), making China the only positive economic area.

This is, of course, a very positive element, as it is likely to cushion the shock that the emerging market economies have suffered. However, counting on this too much is difficult because China’s structural fragility remains:

Given the low levels of vaccination and acquired immunity, the risk of a new wave and related health measures is very high.

The real estate crisis is far from resolved. The state avoided a major crisis in the real estate development sector with aggressive support measures, but the dynamics of this market remain negative in terms of prices and sales. The outlook for private players is very bleak, with large unsold space, public distrust and unsustainable credit margins.

Finally, China is highly dependent on external demand, especially from emerging economies. Thus, the likely slowdown in the latter, in turn, will affect the Chinese economy. Tensions between the West and Russia, an ally of China, could worsen the situation with possible trade sanctions. 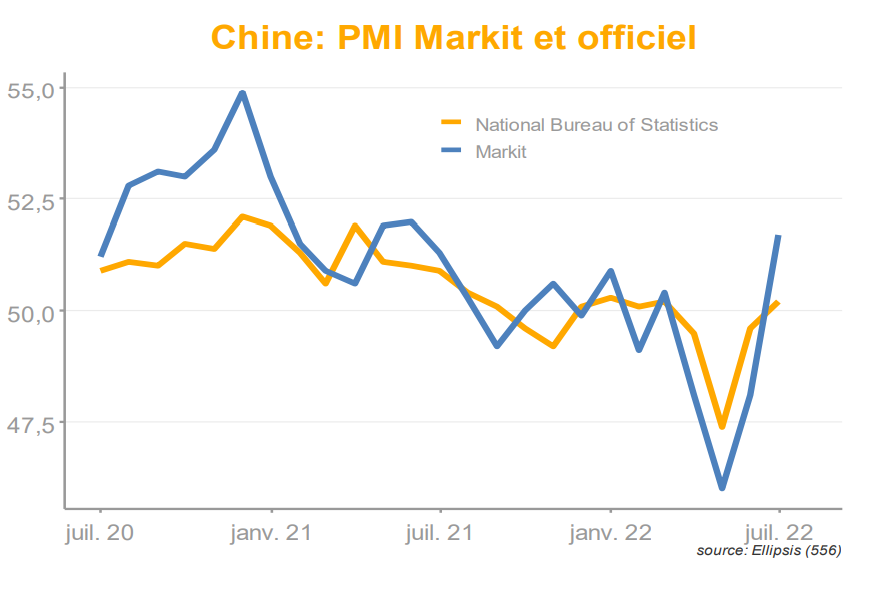 There were some hiccups in the ECB’s message on peripherals at the start of the month, leading to very rapid increases in spreads and real rates, a configuration that may have reminded us of the eurozone crisis.

The position of the ECB is currently very uncomfortable as it has to fight both inflation (a restrictive stance) and fragmentation (a purposeful accommodating stance). She confirmed her intentions, but did not specify how she intends to act specifically, which should be disclosed at the July meeting.

Flexibility to reinvest in existing programs (PEPP, PRPP) is one way, but probably not enough given the scale of the problem. The ideal instrument should be able to raise unlimited sums for an indefinite period of time to discourage any speculation. Counterparties will certainly include sterilization (withdrawal of liquidity created through the sale of other assets) and a form of conditionality likely to be less restrictive than that of OMTs.

Finally, note that today’s situation is very different from that of the 2012 crisis: – There is consensus that it would be counterproductive to allow the situation to deteriorate – The principle of monetary support for sovereign markets has been upheld by the Court of Justice EU and, finally, Italy has led to that the average level of its debt has dropped significantly during the period of monetary support, and it will not quickly rise again. 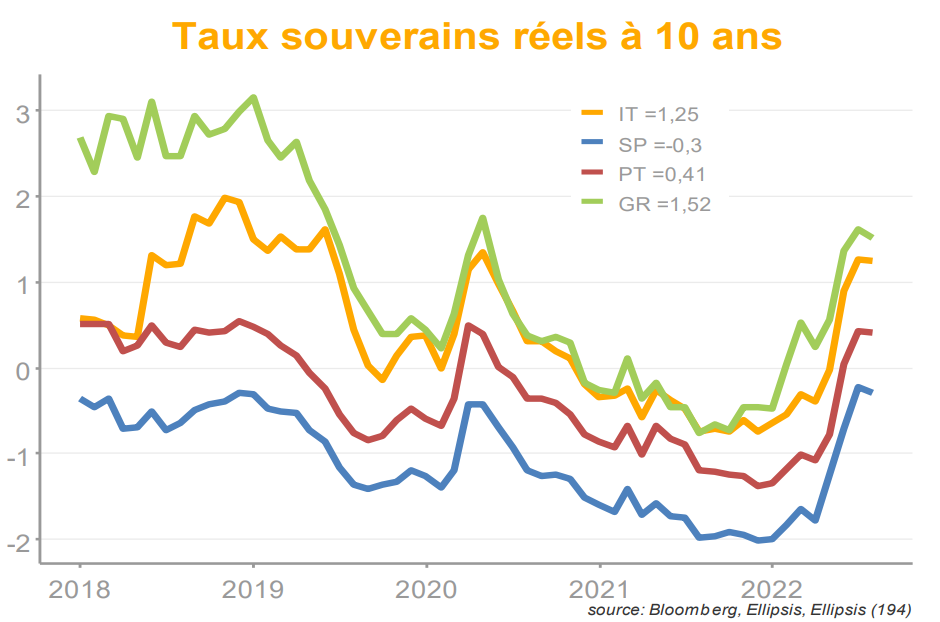 The contents of this document should not be understood as investment advice or within the meaning of the European Market Abuse Regulation. WT No. 596/2014 of April 16, 2014 or within the meaning of the directive MYTH2 2014/65/EU dated 15 May 2014 Any instruments or issuers mentioned are intended solely to illustrate past situations and therefore developments in this context should not be taken as forward looking. These opinions come from the experience of the Ellipsis AM managers in their fund and mandate management. These portfolios may be linked to the sectors, strategies and instruments mentioned in this paper and future management decisions are not limited to the comments and analysis presented and may even take the opposite direction.